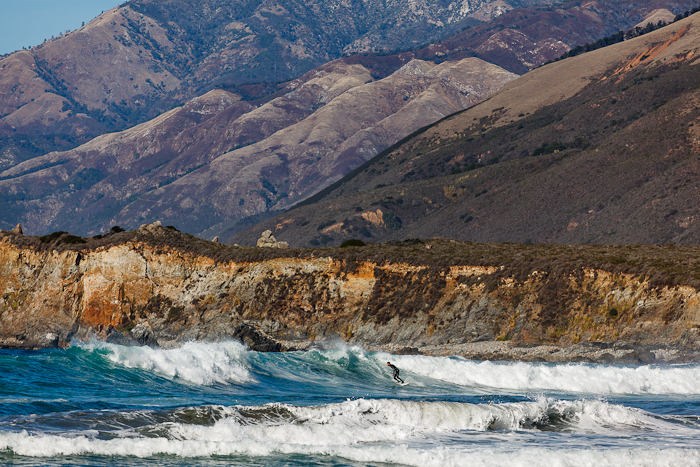 This Thanksgiving Adam and I decided to spend it just the two of us surrounded by redwoods on the edge of the world (or so it seemed). Both itching to be in nature, preferably redwoods (Adam’s request) we wanted some good hiking and the opportunity to be cold enough to wear a beanie and gloves.

My googling searches led me to a cabin in Riverside Campground in Big Sur. It had a fire pit in front, a babbling brook next to it, plenty of redwoods and they would allow our sweet dog to stay with us as well.  Sold.

Big Sur had always been this mystical place to me. Whenever someone tried to explain it it sounded more like explaining the absence of a town and the overwhelming presence of nature.

I love to read up on places before I go, but this time I got my information from different travel source. Instead of Frommers or Lonely Planet I went for Jack.

He titled his book Big Sur  which was straightforward enough so I thought maybe I can get a better idea of what this place is if Jack explains it. He terrified me. In the early 60’s from Monterey he takes a cab to a friends cabin on a moonless foggy night. The driver drops him off at the beginning of a bridge that he can’t see more than the headlights show. The cab driver warns him to watch his step and drives off. Jack had a lantern, but it was so dark and foggy that it’s light only fell on his feet. The sounds of waves exploding against the shore or the bridge or something solid confuses him. It seems to be coming from below him but he can’t see anything but the ground his feet are standing on. Carefully he shuffles the route of a map he had memorized, hoping that there is ground under each step he takes. In the book he gives the bridge a fictional name but it is believed to be the Bixby bridge pictured below. 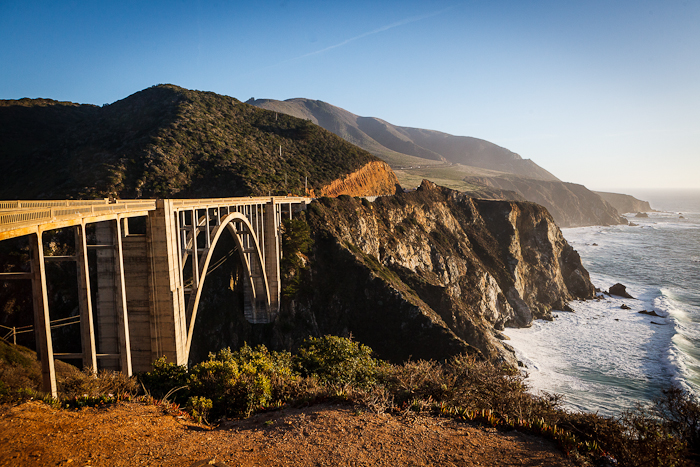 Jack makes it to the cabin and for the next few weeks lives in Big Sur, exploring the land and his deepest self. He calls the land “uninhabitable” and often refers to the remains of car that drove off the same bridge he crossed and only the humanless wreck remained. Looking up at the bridge he says you “feel death and for good reason”.  I should mention that he goes through many phases of being a drunken mess, and this is no ordinary drunken mess. It’s a Jack Kerouac drunken mess which means that in addition to starving himself and constantly “getting another bottle”  he is also questioning his worth, the mice he feeds, God, the lives of his friends, the sounds of the waves, the intention of the ocean, the death of a sea otter etc.

His interpretation being terrifying on one page and full of babbling creek bliss on another was very intriguing. I wondered if I would have felt the same way going there if I hadn’t read his story.

The drive was 8 hours and it was beautiful the entire way. Just above San Luis Obispo the rolling hills began to grow until the road was forced right against the ocean. As we got closer we rose with the mountains and seemed to be driving above the swirling sea. On the drive up I read Adam some parts of the book where Jack was fearful of walking in the dark and being confused by the sounds and about the car that crashed. This set the stage for my nervousness as we got close. I have this weird fear of all of a sudden hitting the gas instead of the brake or accidently making a weird steering wheel move. It’s totally crazy but all I could picture was that car going over the cliff and I’m sure that driver was trying to stay on the road. I was testing Adam’s patience by alerting him to every turn and what the suggested MPH was and that there was a car around the bend in case he didn’t see and to slow down. It didn’t help that the sun was setting and my dog was whining to pee but there were only death pull-overs on this thin road carved into the side of a mountain hanging over the ocean like a Christmas tree ornament.

I took a vow of silence and internalized my fear for Adam’s sake. When we pulled into the campsite it was better than what we expected. We had to cross a shallow stream, and find our cabin. It was just like the picture but with the smells of a redwood forest and the sounds of the dripping fog falling through the pines.

Kai (our dog) had his own human bed that he was extremely happy about. He looked really guilty the first hour fearful we would suddenly realize he was on the bed and yell at him. We made our dinner on our camp stove outside with hats and gloves on (yes!) and played cards and treated ourselves to a bottle of red. 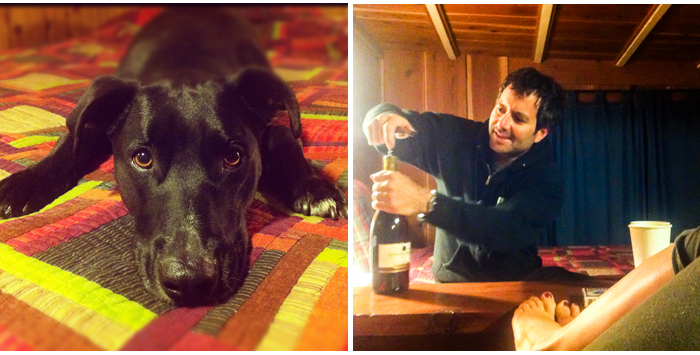 The next day we explored the “town” or lack there of. Big Sur exists in rough terrain that dramatically broke off into the ocean long ago (or that’s what it looks like happened) and it seems to tolerate people living on it, but will only allow so much.

We found a small breakfast place called Deetjens. It is an old home that is slanting towards the ocean and the waitresses have to place things on the table with the slant in mind. It has a warm grandma’s house feeling to it and the food must be made by an actual loving grandma in the back because it hit my soul. 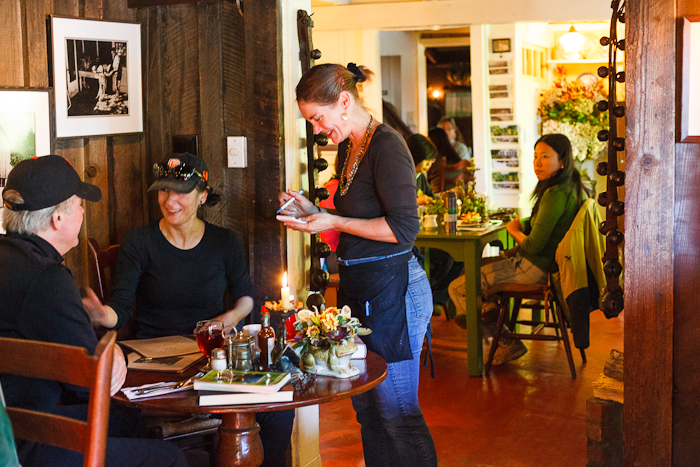 The waitress noticed my Big Sur book by Jack and we got to talking about it. I asked her where the cabin was and what bridge he crossed. Nobody really knows but the Bixby bridge is thought to be what he crossed at night. We pulled over by the bridge and it really is “one fast move or I’m gone”.

On Thanksgiving Day we wanted be really hungry for our dinner out at Ventana (and we wanted Kai tired so he didn’t bark while we left him in the cabin) so we hiked 10 miles into the mountains. We started off in dense redwoods, then did a small climb on a hot exposed trail of shrubs.  When we gained elevation we could see a rushing river far below us and a sliver of the blue ocean through a break in the mountains.  I can see how Jack could feel overwhelmed here considering his mental states, it is a wild powerful place.

On the drive home we were brainstorming on how we could own a cabin there. Just dreaming but you never know. It is a special place that is so far from the freeways of life, the Riverside cabin will have to do for now. Big Sur is a mystical place that seems to exist all by itself on the edge of the world surrounded by those wise trees. The experience was everything I hoped for. 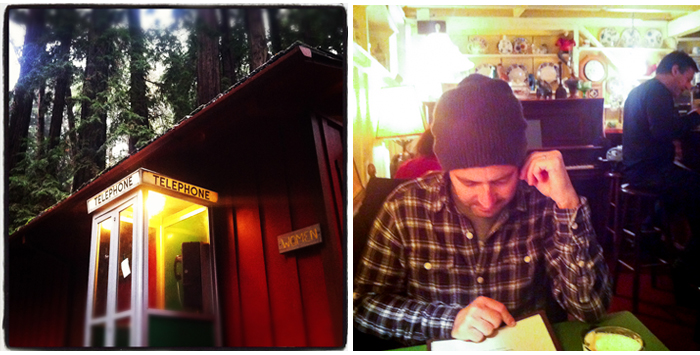 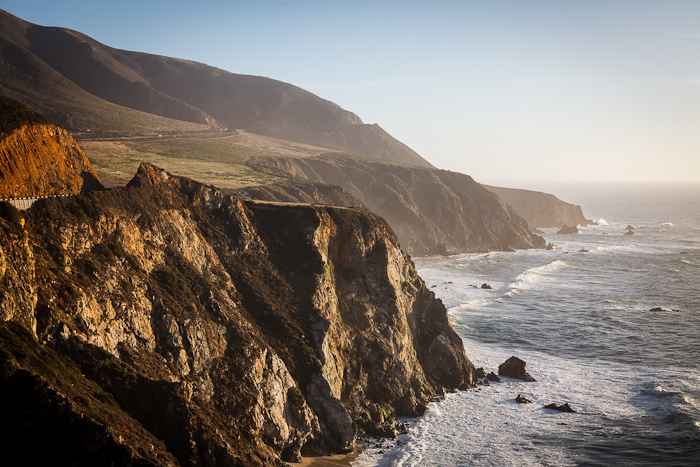 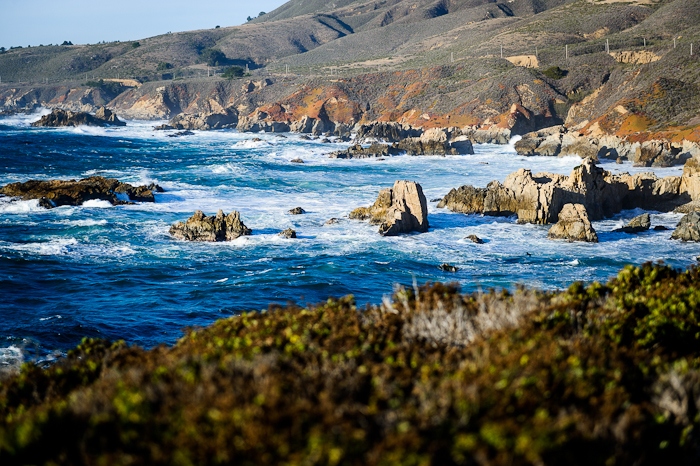 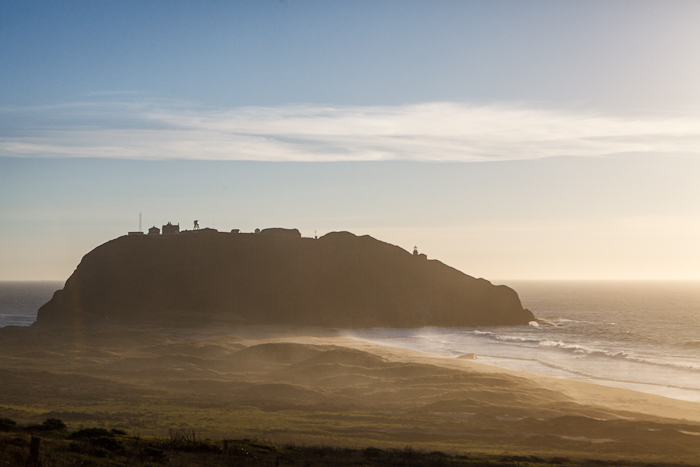 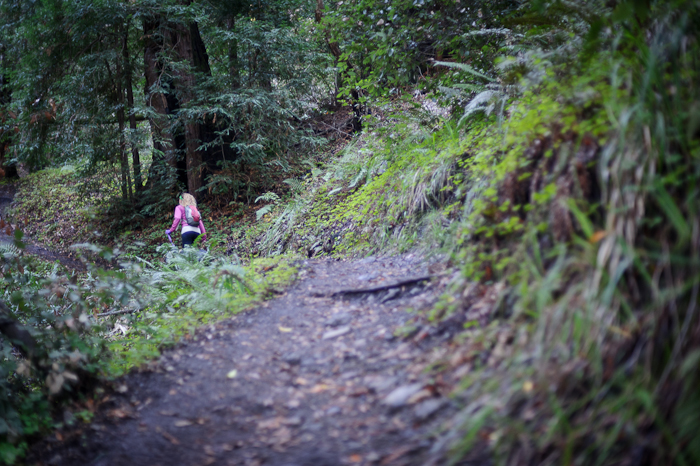 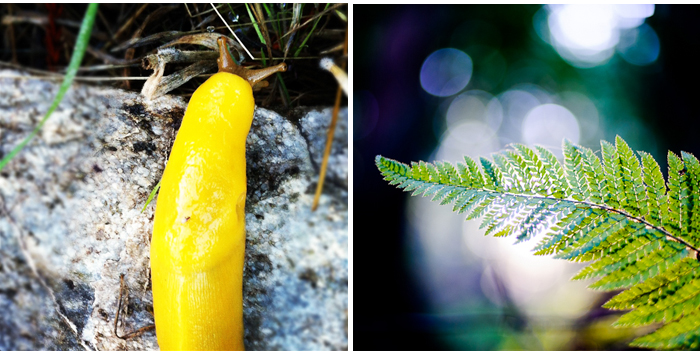 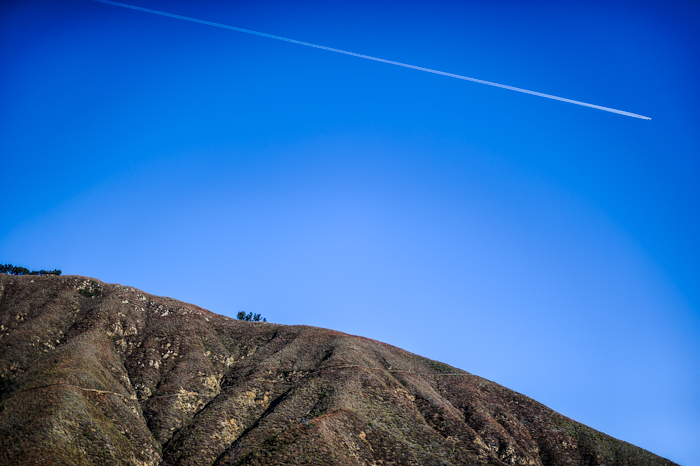 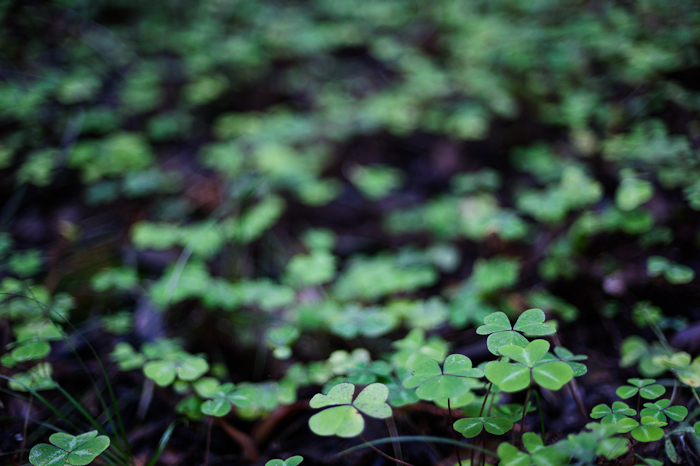 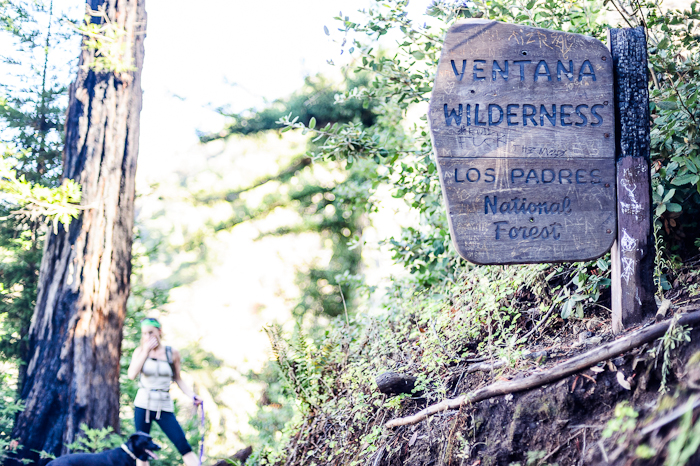 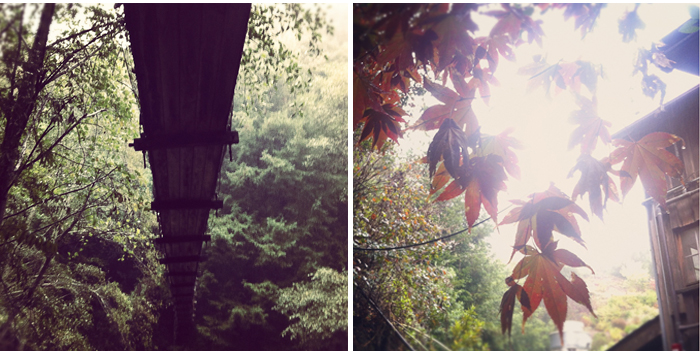 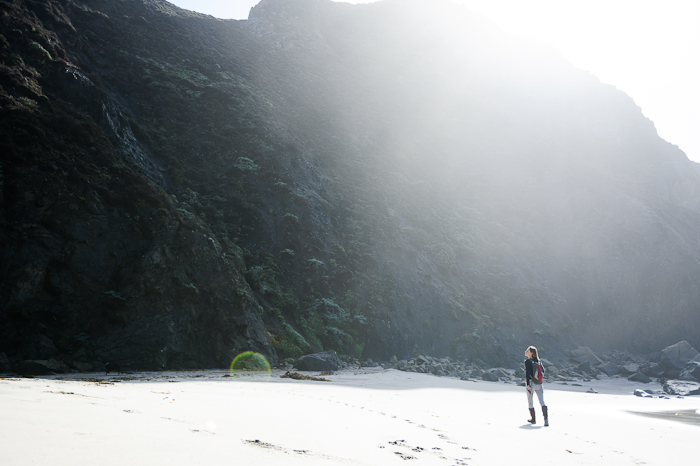 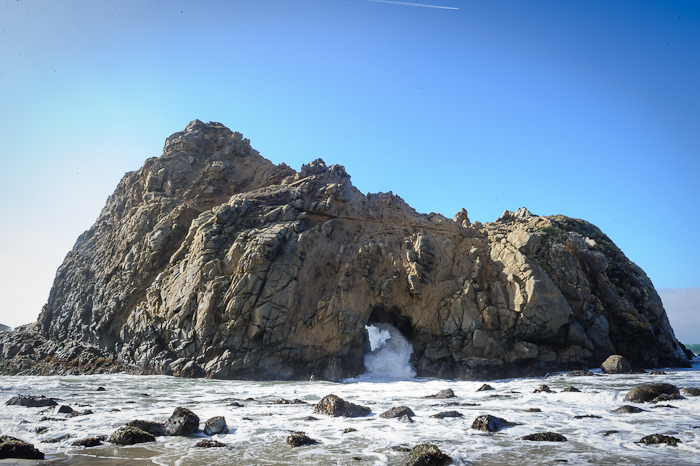 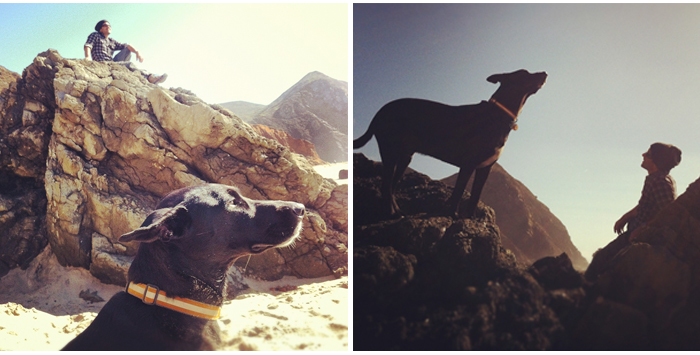 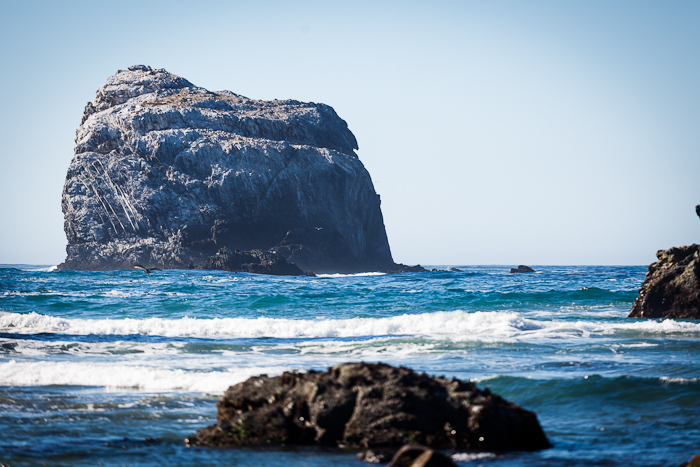 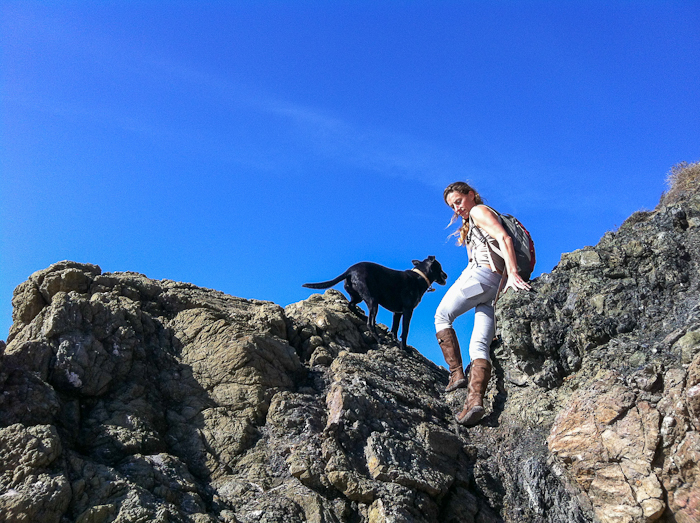 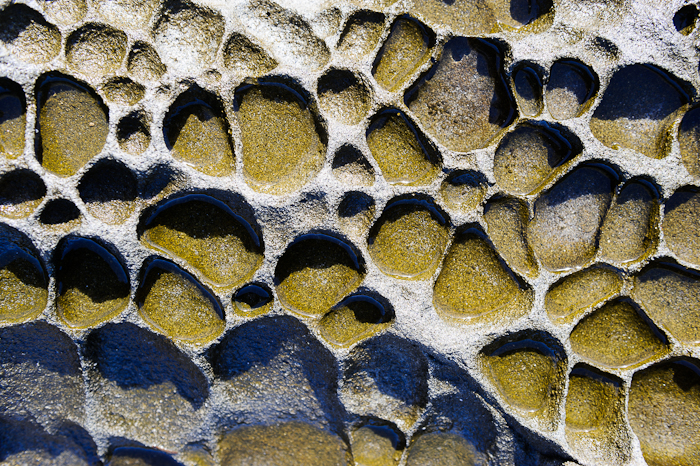 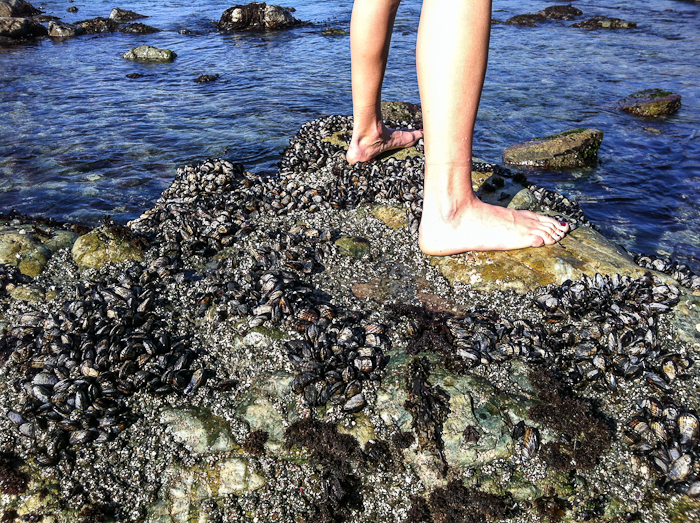 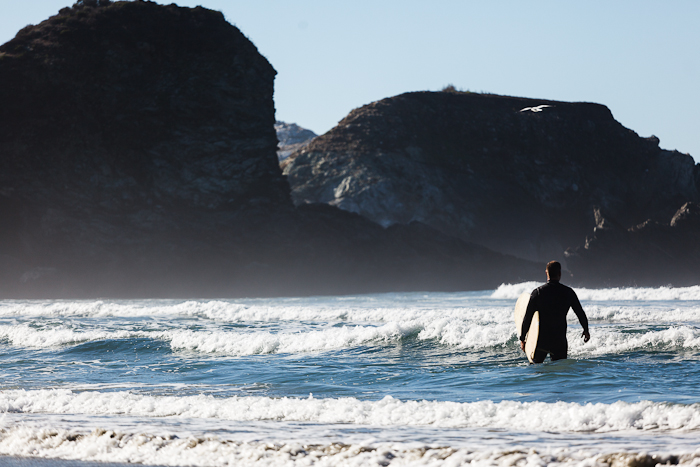 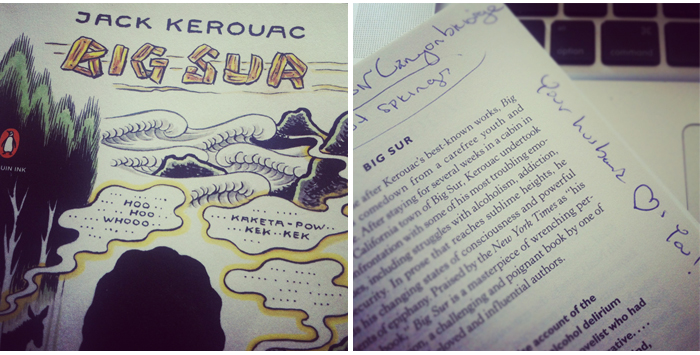 While writing this post I was refering to my Big Sur book. I always write notes and ideas in my books and when I opened it I found this added love note inside!